The Uluru Statement from the Heart and its pedagogic implications 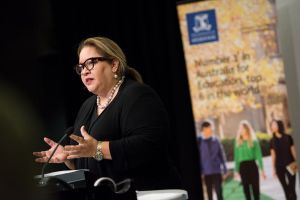 In July 2017, a constitutional convention brought together over 250 Aboriginal and Torres Strait Islander leaders at the foot of Uluru in Central Australia on the lands of the Aṉangu people. Their deliberations led to the development of the Uluru Statement from the Heart ‘which called for a ‘First Nations Voice’ to be embedded within the Australian Constitution and a ‘Makarrata Commission’ to supervise a process of ‘agreement-making’ and ‘truth-telling’ between governments and Aboriginal and Torres Strait Islander peoples.

In this lecture, Professor Megan Davis, who chaired the convention, will discuss the processes that led to the development of the Uluru Statement From the Heart, in terms of the key epistemic and cultural ideas it embodies, its political and constitutional significance for the Australian society and its importance to the work of educators in particular.

Professor Megan Davis is a constitutional lawyer who researches in public law and public international law. Her current research focuses on constitutional design, democratic theory and Indigenous peoples. Professor Davis currently serves as a United Nations expert with the UN Human Rights Council's Expert Mechanism on the rights of Indigenous peoples. Megan is an Acting Commissioner of the NSW Land and Environment Court. She is an elected Fellow of the Australian Academy of Law and a Fellow of the Australian Academy of Social Sciences.

Professor Davis has been working on issues of Indigenous constitutional reform since 2011. In 2015 she was appointed by the Prime Minister to the Referendum Council and designed the deliberative constitutional dialogue process the Council undertook.

Professor Davis was named in the 2017 Australian Financial Review annual power list and was ranked number 7 on the Cultural power list for her work on constitutional reform and delivering the Uluru Statement From the Heart.